This is the second in a new series of four blog posts in which I show how a journal article or book has inspired me to improve my teaching practice. Each post ends with a practical resource or activity. Today I show how my reading of Frankopan’s bestselling book Silk Roads, my reflection of the seminal work of Bailey-Watson and Kennett in the journal Teaching History, and the work of Flaherty  and West on Timbuktu,  helped me to broaden my pupils’ horizons of Medieval history. 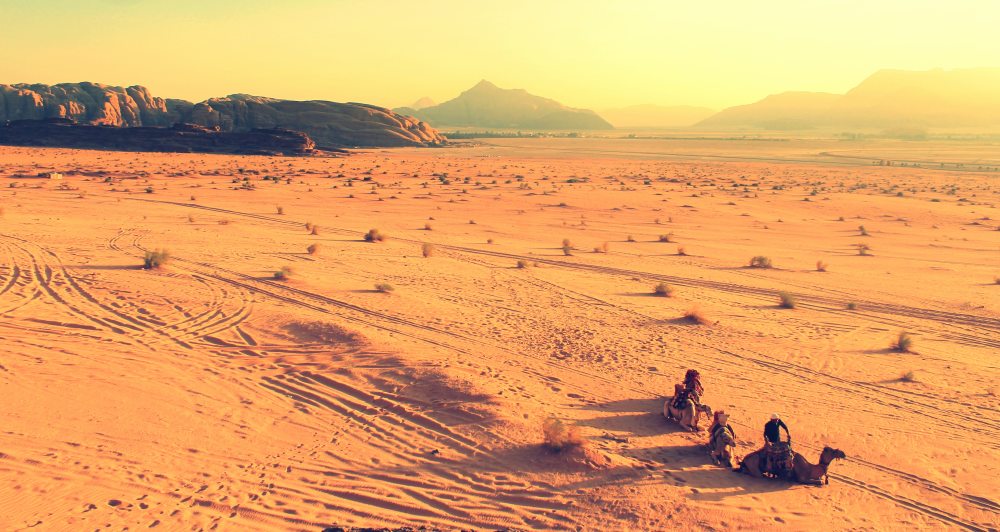 Like many others, I have found that Frankopan’s The Silk Roads has changed my view of Life, The Universe and Everything. My story here is one of countless stories that Frankopan has opened up to me.

Inspired by historians such as Frankopan and Olusoga, enthused by the work of history educators such as Bailey-Watson and Kennett, and curious about OFSTED’s new focus on the curriculum, I have begun attending to our KS3 schemes of work. Male? Yes. Pale? Yes. Stale? Absolutely: it is in desperate need of updating. Much like a Nokia 3210, it is way behind the times, incorporating embarrassingly little of recent debates among historians.

Because it was the summer holidays, I decided to tackle two curricular problems at once: scope and rigour. The first problem was that our Year 7 curriculum was too Eurocentric. The second problem was that it needed to be reinvigorated by recent historical scholarship. In Frankopan’s The Silk Roads, I literally struck gold. Frankopan explains that, if a Medieval merchant were to travel beyond the ‘inhospitable and uninhabited desert’ of North Africa, they would be somewhat amazed by the ‘great riches’ of West Africa:

‘The mineral wealth of this region was the stuff of legend, a region known to early Muslim writers simply as ‘the land of gold’… [this led to] the development of flourishing cities such as Djenné, Gao and Timbuktu, which became home to royal palaces and splendid mosques…By the early fourteenth century, Timbuktu in particular was not just an important commercial centre but a hub for scholars, musicians, artists and students…’

I was hooked, I was embarrassed. Cities, in Africa, in the 1300s? If I had never heard about the outstanding work of Flaherty and West on Mansa Musa and the history of Timbuktu at a recent SHP Conference, I would have said Timbuktu was a Grimm’s fairy tale and nothing more.

I wanted to know more. Here was an opportunity to shine a light on other cultures and empires way beyond the Williams, Edwards and Richards of England. Here was a chance to tackle historical myopia. And not only that – the study of Medieval Mali could help correct a problem with perspective – as the historian Northrup argues:

‘Historians need to move beyond externally generated and Eurocentric perspectives that treat sub-Saharan Africans in terms of their skin colour, their prominence in modern slavery, and the legacy of guilt that slavery and discrimination have left in the modern world.’

The Malian Empire was situated in the savannah of West Africa, to the south of the Sahara desert, in around 1250-1400. It traded gold for the salt of the Sahara and it traded 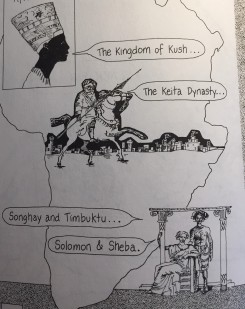 ideas with Muslim merchants on camels from Cairo and the Middle East. These merchants were those of the infamous Silk Roads. The medieval Silk Roads of the Middle East and Asia were, according to Frankopan, ‘the axis on which the globe spun’. The vibrant Mali Empire of Western Africa was connected to these Silk Roads at a time when western Europe was nothing but a ‘regional backwater’. And Africa was known to medieval England, if mostly in legend. As Olusoga comments in Black and British: ‘Both the people and their continent continued to reside within the realms of myth, legend and scripture.’

And, almost as if he did the journey just to excite a recalcitrant Year 7 class on a Monday morning, the King of Kings of the Malian Empire – Mansa Musa – spent so much gold on his pilgrimage to Mecca that he caused a mini-depression in the Middle East. Flaherty and West’s research suggests that he was the richest man of all time. What an amazing story. Here was an opportunity not just to diversify our curriculum, but also to teach Year 7 about trade, monarchy, faith, government and society.

In researching a way to bring in a study of medieval Mali into our curriculum, I came across a fascinating book in which historians had conversations about how to incorporate Africa into world history. The historian Reynolds presented an immediate problem:

‘One of the key issues that all who dare to do world history must struggle with is the question of human similarity and difference. “Lumpers” argue that all people are basically similar and can be understood using similar concepts and questions. “Splitters” see peoples in different times and places as basically incomparable.’

This was a pivotal moment in my planning. I had wanted to incorporate Medieval Mali into our study of the Crusades, holding up Mansa Musa’s journey as one of many different types of pilgrimage to the Holy Land. This appeared, at first glance, to be sensible curricular sequencing:  Mansa Musa’s pilgrimage was exciting, but it would also be familiar to Year 7, who would have an understanding of why people went on pilgrimage before studying Mali. I could, quite literally, ‘lump in’ Malian Mansa Musa in Mecca (along with all the annoying alliteration) with the Crusades and then usher the Year 7s quickly onto the Black Death.

Yet what if my curricular ‘lumping’ meant that I had shoehorned Medieval Mali into a European paradigm of world history, with its familiar pilgrims and kings? If I was imposing a European frame of reference onto an African one at this point (was Musa’s idea of pilgrimage different from Henry II’s?), was I actually diversifying the curriculum?

‘Splitting’ didn’t seem like a good idea though, either. Like Reynolds, I am uncomfortable with the underlying characterisation of Africans as ‘different’. Is it possible to consider an ‘African’ point of view anyway, considering Africa’s diversity? Continents are rather blunt instruments of historical analysis.

This mattered to me because my intention was to diversify our KS3 history curriculum, and I decided that focusing on Medieval Mali through the lens of Mansa Musa’s pilgrimage may risk Year 7 seeing the enquiry as ‘just another pilgrimage’. I therefore returned to the scholarship. Here, the focus appeared to be on why Mali was so successful when other parts of the continent were not.

Why such a fuss about this success of Mali? In one word: geography. As Tim Marshall, author of Prisoners of Geography, points out:

‘There are lots of places that are unsuccessful, but few have been as unsuccessful as Africa…terrible natural harbours…rivers [are] rubbish for actually transporting anything, given that every few miles you go over a waterfall…the great rivers, the Niger, Congo, Zambezi, the Nile, and others, don’t connect…few plants willing to be domesticated, and even fewer animals…a virulent set of diseases…separated from everyone else by the Sahara desert and the Indian and Atlantic oceans. Almost the entire continent developed in isolation from the Eurasian land mass, where ideas and technology were exchanged from east to west, and west to east, but not north to south.’

It was the Mande people’s ability to make a link to the west-east/east-west Silk Roads that made it a success. So I decided that this would be my focus, and it would help me to make the point that, going back to Frankopan, it was on the Silk Roads that the ‘globe span’. So I decided to trade a tidy tacking-on of ‘yet another pilgrimage’ for rivers, gold, merchants and oases across the Savannah. I wanted Year 7 to identify the reasons for Mali’s success as part of a causal enquiry because my reading of historical scholarship suggested that historians view much of Mali history through this lens.  I therefore developed the enquiry question: ‘Where did Medieval Mali keep its secrets of success?’, encouraging Year 7 to concentrate on geographical causes of success, but also leaving room for them to bring in other reasons, such as the strong leadership of kings such as Mansa Musa. 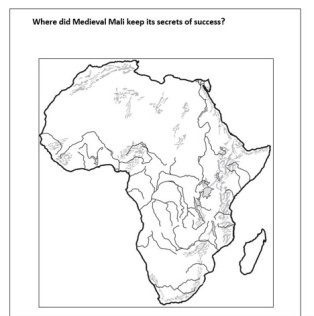 Where did this leave my curricular sequencing? Well it wasn’t as tidy as ‘yet another pilgrimage’ but it was still coherent. I decided to look forwards with my sequencing, rather than behind. By addressing the causes of Mali’s success first, I would enable students to make sense of silver, gold, Spain and Portugal later in the Age of Discovery and building of empires – when western Europe took centre stage.

And here is the main task from my enquiry. I hook Year 7 in with the story of Mansa Musa (he’s too good to do away with entirely), and then I go geographic. I go Silk Roads. I try to change Year 7’s perspective of Life, The Universe and Everything.

Frankopan, P. (2016) The Silk Roads: A New History of the World, London: Bloomsbury.

Yerxa, D. A. (Ed.) (2008). Recent Themes in The History of Africa And the Atlantic World: Historians in Conversation, Columbia: University of South Carolina Press.

Leave a Reply to SOE in Burma Cancel reply