A lot of people have been asking about my approach to my Mali scheme of work so I thought that I would share some of what I have put together. In this blog post, I wrote about how some of my research led me to create a causation enquiry, ‘Where did Medieval Mali keep its secrets of success?’

Since then, I am now reconsidering this approach. I have become more interested in what a study of Medieval Mali can reveal about African kingdoms in the Medieval period. Consequently, I am now reshaping my enquiry around the idea of historical significance. Here are a few things that I am doing: 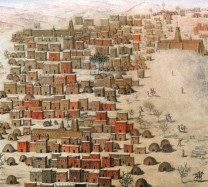 I love this image of Timbuktu, by French explorer Rene-August Caillie’s  (1830), shared during a webinar arranged by Nick Dennis.

3. I am exploring the city of Timbuku with pupils in more detail, because it is astounding. Al-Sahilī was given 55 kilograms of gold for designing the Djinguereber Mosque!  It is vast.  It made the city of Timbuktu more exciting and attractive. Timbuktu became home to many scholars, musicians and priests.  The city became a great centre of learning, boasting a university long before universities built in Europe.  The library at Timbuktu became legendary: it held nearly a million books. With access to such a great range of books, the students from Timbuktu’s schools went on to become architects, astronomers, doctors and engineers.

4. I am including more ‘smaller details’ that reveal a lot about Mansa Musa and about Medieval Mali, e.g.

5. I am reading Toby Green’s A Fistful of Shells. I always find works of scholarship rather frightening to read in their entirety if it’s not a familiar topic, so I first commited to just the first three chapters. There’s a wealth of extraordinary details there. You won’t regret reading it!