Here is an enquiry that focuses upon the experience of African, Asian and First Nation soldiers and labourers at the Western Front. The enquiry is centered around the second-order concept of significance. It will be written up in the journal Teaching History in 2021. I was also planning on presenting these resources at the Historical Association Conference in May 2020. I hope to present them at the rearranged conference in November.

Olusoga’s The World’s War (2014) narrates the experiences of the ‘often forgotten’ colonial armies involved in fighting on the Western Front. The book revealed new aspects of World War I to me: in particular, the sense of alienation experienced by soldiers and labourers from Algeria, India, China and Canada who were fighting and working in and around Northern France in 1914-1918.

The revelatory aspect of Olusoga’s stories of soldiers from Africa, Asia and North America, which have long stayed in the shadows, was powerful. I therefore decided to create a significance enquiry based on these stories, asking: ‘What do the stories of the ‘often forgotten armies’ reveal about the Western Front?’ I decided to focus on four different soldiers:

I constructed narratives for each of these troops, derived from information in Olusoga’s book. I then introduced the different troops to the students. To put my scheme of work into context, the Year 9 students were already familiar with some of the major battles of the war.  They had learned a skeletal chronology of the ‘bigger’ battles. They had also been shown maps of trench positions. What they didn’t yet realise was that the trenches were a ‘melting pot’ of different cultures. In the words of Olusoga, the trenches were a ‘Babylon of races’: 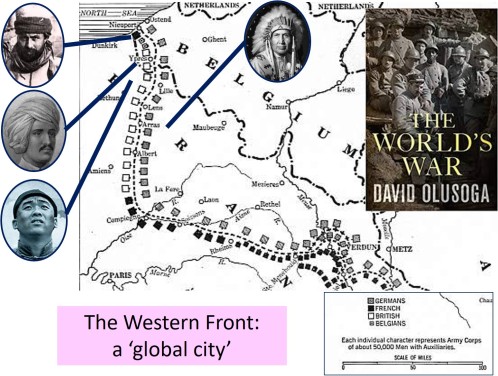 Having introduced the main ‘characters’, I read out the story of Ganga Singh in the First Battle of Ypres of 1914 (available here). There was silence in the classroom as I discussed the sense of alienation and dislocation that Ganga Singh might have felt. We then discussed what the story could reveal about the Western Front:

We did the same thing with Algerian troops in the Second Battle of Ypres of 1915 (available here). Again, there was silence in the classroom. The Algerians collapsed, screamed, spluttered as they encountered chlorine gas for the first time and could not communicate their distress to their officers; ‘the rats die, too.’

In the next lessons we took on the remaining two stories about the ‘often forgotten armies’.

I hoped that this activity would help my students to identify that these soldiers’ stories could be argued to be historically significant because of the light they shed on some other facets of World War I.

Since creating this scheme of work, I have been newly-inspired by the work of Hannah Cusworth on ‘Putting Black in the Union Jack’. In her workshop, Hannah spoke about the importance of pupils understanding the ‘lived experience’ of other peoples and cultures. On the importance of giving them agency, on giving them life. This is what I wanted to do when I put a bayonet in the hand of Ganga Singh. It was important to me that my students pictured him fighting; that events didn’t happen to him. I want them to know that he ‘happened’ too.