I am still woefully colour blind when it comes to the Wars of the Roses. I can barely remember which Edwards came before which Henrys (and wasn’t there a knight in shining armour called Margaret?),let alone plant them into the correct flower pot. Faced with the complex narrative of the Wars of the Roses, the ‘lower-order’ skill of comprehension suddenly appears far from lowly. Every year, I have to relearn the basic narrative of events that eventually saw Henry Tudor emerge as King.

I had decided early on in my teaching that I need to begin our study of the Tudors by tackling the Roses. Only then can my pupils understand the royal family’s desperation to avoid another civil war. Only then can they put Henry VIII’s domestic violence and Elizabeth I’s regicide into context.

The story of the Roses is so violent, so complex and so intriguing that I felt that taking my students through the narrative ‘straight’ (me talking, students listening, perhaps with a few visual aids and a bit of Shakespeare’s Richard III for variety) was enough to engage them. As Kennet has recently argued:

Stories are powerful…Stories are accessible. No matter how mixed ability your class is, if you tell a story all of them should be able to be involved in a way that other methods can’t.

After taking Year 8 through the action-packed journey as a class – through the bloody battles, the intrigue, the unsuitable marriage and the scary uncle – I wondered what to do next. There is so much rich history here that of course I could spend the whole of Year 8 on the topic and barely have enough time for Bosworth before the summer term trip to Alton Towers. Yet, due to lack of curriculum time, our history is too often done at a gallop.

As always when constructing a new historical enquiry, I was faced with some difficult questions. How can I help pupils to journey safely through such a complex narrative in order to gain some important contextual knowledge before embarking upon our more sedentary Tudor tour? How can I balance the fascinating details of the Wars of the Roses with the practical need for speed? How can I encourage pupils to convert the narrative into a shape that was meaningful to them?  I eventually decided that I needed my students to consider the smaller changes within the wars as a whole, else I was in danger of leaving them with an overly simplistic view of the wars as a Medieval bloodbath.

Tim Jenner appears to share my concern with unacceptable oversimplifcation. Jenner’s purpose in his teaching of Henry II and Becket was ‘to move pupils beyond a static conception of Henry and Becket’s relationship as eternally antagonistic.’  Inspired by Foster’s use of a road map to help pupils to conceptualise processes of change,  Jenner asked his Year 7 students to analyse the changing relationship between Becket and Henry so that they could put that relationship in its complex, changing, temporal context.He created an engaging timeline-based device to help his students chart the pattern of the changing relationship between king and archbishop. I would warmly encourage you to take a look at his article and activity (which I use every year) if you have not already.

As Jenner points out, the underlying principle behind his activity is ‘not, of course, new: the use of active time-lines, in which pupils are challenged to make an analytic judgement leading to reflection on the type or degree of change that has occurred, was recommended and illustrated with practical activities by the National Curriculum Council as long ago as 1993.’ Furthermore, I would not be in the business of examining change in a particular relationship, which is one of the unique strengths of Jenner’s timeline activity. However, Jenner’s work reminded me of the substantive and conceptual rewards of using timelines, and I was directly influenced by his selection of a rigorous and engaging enquiry question.

Enthused by Jenner’s deceptively simple device, I created an activity that required my pupils to consider how stable England was at different points during the Wars of the Roses (which you can find here:wars-of-the-roses-timeline-worksheet). 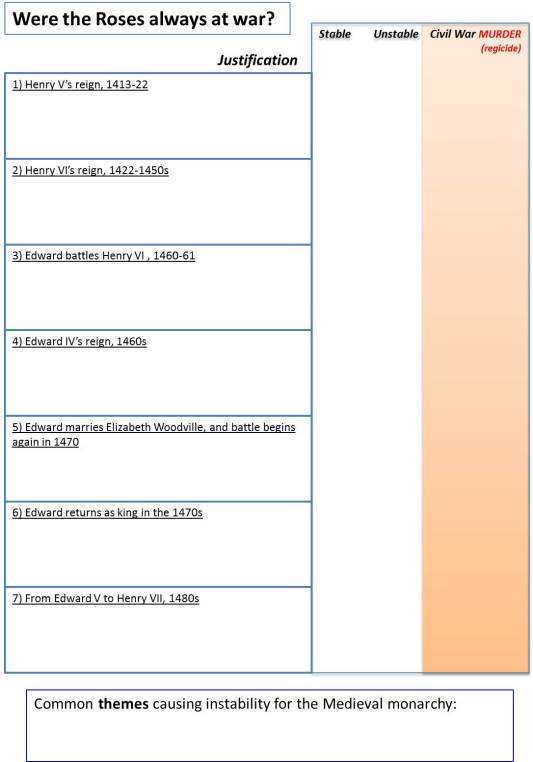 Jenner had asked ‘Were Henry and Becket always enemies?’, an enquiry question that ensured pupils sustained an analytic focus upon change. I mirrored his question by asking ‘Were the Roses always at war?’, which I hoped would encourage pupils to think about the wars as a multi-headed beast, rather than a monolithic Medieval monster. It also inspired thoughtful student discussion about what it means to be ‘at war’ – does it have to be direct and physical confrontation? Were there ‘Cold War’ type episodes during the period? We also had some fruitful discussion about when the civil war began, extending pupils’ thinking about change.

Again, like Jenner, I wanted my pupils to be independent and to use information from a resource sheet (which you can find here: wars-of-the-roses-information-sheet) to decide whether England was ‘stable’, ‘unstable’, ‘at war’, or had resorted to regicide at any given time. This independence encouraged pupils to build their substantive knowledge through the process of knowledge transformation (using the information to make and defend judgements about change). I also created a  more challenging information sheet for higher-attaining pupils (which you can find here:war-of-the-roses-challenging). By having to think carefully about the type and extent of change characterised by the smaller events within the civil war period, pupils’ confidence with the Henrys and the Edwards grew. In this way, I hoped to avoid too many pupils slipping into what Counsell has called ‘the chronologically lost’.

Very quickly, pupils discovered that there were short periods of relative peace and prosperity amidst the blood and guts. Like Jenner, however, my activity serves only a starting point in thinking about historical change. It is a first step in a longer-term journey towards increasingly complex, multi-thematic or larger-scale patterns of change. Yet, by focussing on change on a smaller scale, Jenner discovered that his pupils…

…had clearly got beyond trying to characterise change merely by summarising the difference between two different states of affairs, and instead were benefitting from having explored the messier, uneven process that took place.

Messy and uneven – that, for me, characterises the Wars of the Roses. Not a uniformly dark journey into a big, black, murderous hole from which Henry Tudor rescued England. The past is never a rabbit hole – it is a warren.

Kennett, R. ‘Once upon a time: the power of stories and how we can use them effectively in the history classroom’, Schools History Project Annual Conference, 8-10 July 2016, Leeds.